TAlarge amount of violence and traffic accidents today has led to an increase in the incidence of abdominal trauma. Because of its large volume and position, the liver is the most commonly wounded organ (73%). The usual methods for solving traumatic hepatic lesions have been suture stitching and hemostatic protein sponges. The appearance of new cyanoacrylate adhesives could spell an alternative, due to their fast hemostatic action.

The experiment was distributed into four groups: The Control Group, Time 1 (after 48 hours of healing), Time 2 (after 6 days) and Time 3 (18 days after surgery). A laparotomy was used in the Control Group and the wound was closed in layers with a conventional suture. 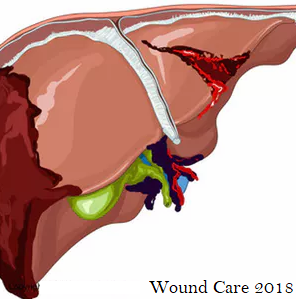 In Times 1, 2 and 3, a laparotomy was performed and four traumatic lesions were made, penetrating the liver with a punch biopsy of 0.8 mm in diameter and 3 mm in length. In each lesion, one treatment was applied: One with a purified collagen sponge (Gelita-Spon®), another sponge with fibrinogen and thrombin (Tachosil®), the elastic cyanoacrylate adhesive, and one wound was left to heal by itself. The Control Group animals were euthanized when they reached 400 g in weight, and those from the Times 1, 2 and 3 groups at the time indicated. A full histopathology study was carried out, involving staining with hematoxylineosin, Masson’s trichrome, Schiff (PAS) and the immunohistochemical markers CD31 (angiogenesis) and CD68 (macrophages). Measurements were also taken in microns (μm) for the distance between the edges of the lesion and the width of the inflamed band around the lesion.

Furthermore, proteomic array determinations were carried out to detect the levels of expression of the following proinflammatory cytokines: CXCL1, CXCL3, CNTF, fractalkine, GM-CSF, ICAM-1, IFN-gamma, IL-1α, IL-1β, IL-1ra, IL-2, IL-3, IL-4, IL-6, IL-10, IL-13, IL-17, CXCL10, LIX, CXCL9, CCL3, CCL20, CCL5, CXCL7, TIMP-1, TNF-α and VEGF. ELISAs were used to determine the concentrations of the following metalloproteinases in the extracellular matrix: MMP-1, MMP-2, MMP-3, MMP-7, MMP-8, MMP-9 and MMP-13. The proteomic determinations indicate that applying the cyanoacrylate had the same effect with inflammatory cytokines as in other treatments. However, in the case of the metalloproteinase

there was a greater, longer-lasting expression in the lesions where cyanoacrylate was applied, which is compatible with the chronicity of the healing process.

The histopathology reveals that the adhesive causes an intense inflammatory reaction throughout the three group times, characterized by a greater presence of neutrophils and lymphocytes as well as by the formation of giant cells. The measurements indicate that as the healing process progresses in lesions treated with cyanoacrylate, the distance between the lesion’s healthy borders increases, as well as the width of the inflamed band.

Although the cyanoacrylate has proven to be an effective method in achieving hemostasis for liver damage, these tests show that it causes a granulomatous reaction to a foreign body that impairs the healing process compared to the observations in the other treatments used.