Even in today’s digital age, the world still relies on paper and ink, most of which ends up in landfills or recycling centers. To reduce this waste, scientists have now developed a low-cost, environmentally friendly way to create printed materials with rewritable paper, which is made out of tungsten oxide and a common polymer used in medicines and food.

The U.S. has been working to reduce paper waste by increasing recycling efforts for years. According to the Environmental Protection Agency, more paper is now recovered for recycling than almost all other materials combined. This saves energy, water, landfill space and greenhouse gas emissions. But even more, waste could be avoided if consumers could reuse paper many times before recycling or trashing it. So far, however, such products under development often are made with toxic, expensive organic dyes. Ting Wang, Dairong Chen, and colleagues wanted to come up with a better solution. 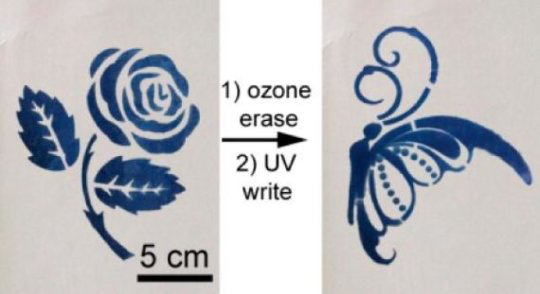 The researchers created a film by mixing low-toxicity tungsten oxide with polyvinylpyrrolidone. To “print” on it, they exposed the material to ultraviolet light for 30 seconds or more, and it changed from white to a deep blue. To make pictures or words, a stencil can be used so that only the exposed parts turn blue. To erase them, the material can simply sit in ambient conditions for a day or two. To speed up the erasing, the researchers added heat to make the color disappear in 30 minutes. Alternatively, adding a small amount of polyacrylonitrile to the material can make designs last for up to 10 days. Testing showed the material could be printed on and erased 40 times before the quality started to decline.

This rewritable paper can be ‘printed’ on with a stencil and UV light; it erases when exposed to oxygen in air or ozone.

Gather at 6th International Conference on Recycling and Waste Management which will be held in Dubai, U.A.E during December 3-5, 2018 to explore the various recent researches in recycling and waste management areas.